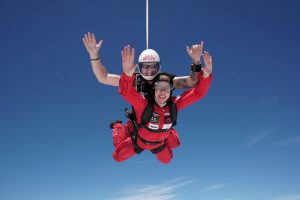 The jump was postponed from the original date of 1 May due to low cloud and high winds, resulting in a ten-week delay.

However, the extra time allowed the girls to gain further funds and they have raised, in total, a staggering £7,000.

Their adrenaline-fuelled experience began the second they left the plane at 12,000 feet, free-falling through the clouds at 120 mph for forty-five seconds.

Once through the clouds, their parachutes were deployed, allowing these brave ladies to enjoy spectacular views of the Wiltshire countryside as they floated down, landing gently in the drop zone, thanks to the skills of their respective Red Devil. 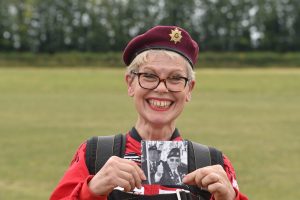 Susy carried veteran Ted Pieri’s beret. Ted, who passed away in January aged 92, was the first person to do a fundraising skydive for the Taxi Charity and in doing so started a bit of a trend. He was a member of 250 Light Composite Coy. RASC. 1st Airborne.

Susy Goodwin say’s “Climbing through the clouds we reached 12,000 feet. The instruction came to put on our goggles and wait to move to the now open door. Sitting on the edge of this little plane and staring into the clouds beneath us, for some insane reason I thought it would be like jumping onto a 13-tog duvet covered with cotton wool and shaving foam! But I loved it and would I do it again- yes in a heartbeat”

Ian Pieri, Ted’s son said “How great that Susy completed the jump successfully. My dad would have been absolutely thrilled and so very proud of you. It was both wonderful and emotional to see you with Dad’s picture and his beret. It made my week.” 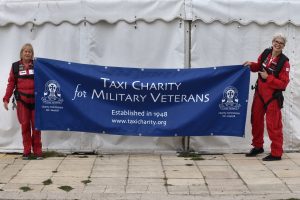 Anne Parsons said, “I was extremely honoured to jump in Justin’s memory.” and his widow Jennifer said afterwards: “Justin would be so proud of you for being so brave and raising all that money.”

Would the ladies do it again?

“Absolutely,” said Susy, who clearly relished the idea of a second jump.

Not so Anne, who despite the amazing experience, announced her immediate retirement from skydiving to pursue non-adrenaline adventures. 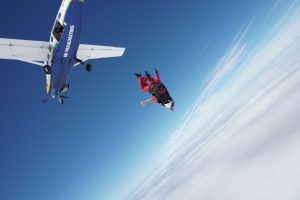 The charity offers international trips to Holland, Belgium and France, UK day trips to concerts or museums, transport to attend fundraising events, as well as special days out to catch up with friends and comrades.

To find out more about the charity or to donate visit the website http://www.taxicharity.org