Two magnificent life-sized lions, painted in oils by Lélia Pissarro and Lyora Pissarro, will be on display at the Stern Pissarro Gallery in Mayfair before being auctioned by Christie’s Director Hugh Creasy 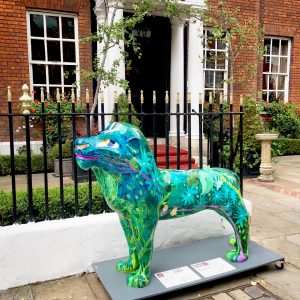 Mother and daughter artists Lélia and Lyora Pissarro painted their lion sculptures in London in July for the ‘Lions of Windsor 2019’ public art trail, which saw a giant pride of supersized lion displayed across Windsor and the surrounding region from August to October to celebrate Queen Victoria’s 200th anniversary.

The Pissarro lions were displayed together in the heart of Windsor, where they delighted thousands of residents and visitors from around the world.

The stunning Pissarro lions will join twenty-nine other large lion sculptures and seven smaller lion cubs at the charity auction conducted by Christie’s Business Director, Hugh Creasy and hosted by BBC Radio panellist Tim Brooke-Taylor at the Runnymede on Thames Hotel on 28 November to raise funds for charity.

Lisa Todd, Lions of Windsor Creative Director said, “The charity gala auction will give art connoisseurs and collectors from around the world the opportunity to own one of these magnificent, individually decorated lion sculptures or perhaps even a stunning pair of Pissarro’s, while also raising funds for charity.”

The Pissarro lions will be on display at the Stern Pissarro Gallery in Mayfair from lunchtime on Friday 15th November until Monday 25th November. To bid for a Pissarro lion or any of Lions of Windsor pride, the auction is now live at UKAuctioneers.com  For auction tickets and further details see www.lionsofwindsor.org

80th Anniversary of the Evacuation of Dunkirk