Some very important visitors were taken to Hall Place and Gardens, in The London Borough of Bexley by the  Taxi Charity for Military Veterans on 5 November, to mark Remembrance Day, the centenary of the 1918 armistice and to help unveil a new statue and bench. 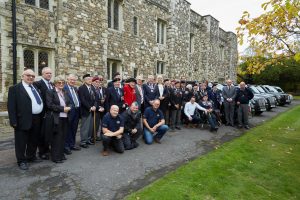 Eight volunteer taxi drivers brought the veterans from all across the south-east. On arrival they were taken on a guided tour of the Hall Place ‘Faces of the Great War’ and the ‘Code name – Santa Fe’ exhibitions before leaving for the gardens, where they spent some time helping pupil governors from Gravel Hill School to sow poppy seeds. The children also heard why the poppy is used as a sign of remembrance. 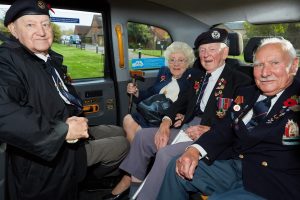 The children and special guests, including the Mayor and Mayoress of Bexley, Cllr Brian Bishop and Cllr Christine Bishop,  Deputy Lieutenant Major David Hewer OBE TD DL, the Leader of the Council, Cllr Teresa O’Neill OBE and local ward Councillors, then attended the official unveiling of the ‘There but not there’ sculpture and bench. The official unveiling was performed by the Mayor and the Deputy Lieutenant. Three wreaths were laid at the foot of the statue. 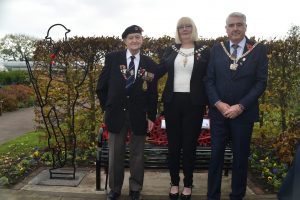 Cllr O’Neill said; “Every Remembrance Day is significant as we remember those who gave their lives for our freedom. As this year marks such an important point in our history with the centenary of the ending of World War One, it seemed only fitting that we recognise it in a more permanent manner by erecting two of these extremely poignant statues in the borough.

“The fact that we were honoured today by the presence of some of our veterans, transported to us by the amazing Taxi Charity who do so much for our armed forces, makes the day even more special. I hope that visitors to Hall Place and Gardens will take the time to see the new installation and bench placed here in honour of all the men and women that gave and continue to give so much for their country.”

Bill Gladden laid one of the wreaths at the statue. As part of the Royal Armoured Corp Bill flew a reconnaissance glider in to Normandy. 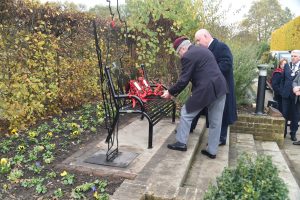 Bill said; “A huge thank you to The Taxi Charity for Military Veterans for arranging this visit to Hall Place and Gardens during Remembrance Week. We have thoroughly enjoyed seeing the exhibitions, meeting the local school children, laying a wreath from the veterans at the “There but Not There” sculpture and catching up with our friends and comrades in such lovely surroundings”.

Following the unveiling the veterans and their special drivers were joined by other guests for a special lunch and an impromptu sing song in the Hall Place Riverside Café before being chauffeured back home. 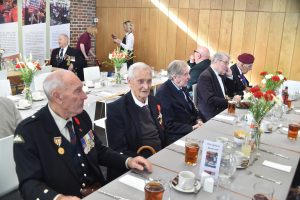 Chris Bowden, MD Relish said, “It was a tremendous day and a real pleasure to have these amazing veterans join us in the café for lunch. When nonagenarian Danny began his impromptu sing song everyone was very moved and  I don’t think there was a dry eye amongst the Café team”