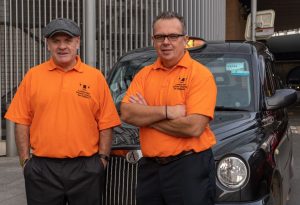 Two of London’s licensed black cabbies who saw their work driving cabs in London dry up almost overnight have joined a leading supermarket to make food deliveries during the pandemic.

London Cabbie Daren Parr said “In February 2020 COVID- 19 changed the world into a state never seen before. London’s streets were eerily empty, Heathrow was quiet and along with millions of other people we were not a position to earn any money.  After offering our services to charities and the Government to no avail,  we were still determined to do something to help the most vulnerable people of London, so we applied to a supermarket and Cabbies Do Kilimanjaro changed from London Taxi drivers to grocery delivery drivers overnight.

Last Thursday night, I was driving down a street in Abbey Wood in my delivery van at 8pm, people were out on the streets banging pots, pans and clapping. Some were pointing at me in the van and cheering. I welled up with a lump in my throat as big as a cricket ball. I could not have been prouder.  At the end of the street I had a delivery. It was to a disabled man who was self-isolating, and he could not have been more pleased and thankful to see me. I knew at this point that, along with millions of other people who have volunteered or changed their careers temporarily, that it was the right decision. We will continue to help for as long as it takes to beat this virus. Thank you to Tesco for giving us this opportunity.”

London Cabbie John Dillane said “Daren and I were as shocked as the rest of the country with both the speed and impact that this deadly virus has had on the everyday lives of the UK. Overnight our work as cabbies in London disappeared and we were basically unemployed. This cruel disease seems to target the most vulnerable sections of our communities and at the same time as these people were being told to stay at home, others, who could get out, were stripping supermarket shelves of basic supplies! We quickly learned that online supermarket deliveries were people’s lifelines, but the big retailers were struggling to keep up with demand and were desperate for drivers to get these supplies to where they were needed. Daren and I, along with many London Cabbies applied to Tesco and were fast tracked through their training system onto the frontline. Cabbies do Kilimanjaro are proud to be doing our bit for our country in this war against an invisible lethal foe.”

Daren and John are still training (within government guidelines) for their huge challenge in October to climb Mount Meru and Mount Kilimanjaro back to back for a charity that is very close to their hearts.

Daren said, “The social distancing regulations mean that The London Taxi Drivers Charity for Children have had to cancel many of its events and fundraising activities this summer, so now more than ever we need to raise  as much as we can to ensure this charity has some resources to continue the amazing work it does to support special needs and disadvantaged children.”

You can follow the Cabbies do Kilimanjaro story at www.cabbiesdokilimanjaro.com